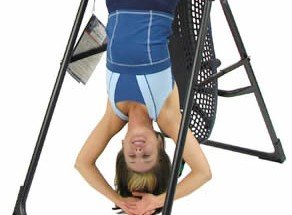 About A Week Back

ME:  “Dad, I have a headache and my stomach hurts and I feel like I’m gonna throw up.”

DAD:  “What do you hear from your liver?”

I knew this retort had something to do with my complaining too much, but even when we felt sick it got a smile out of us (especially if we proceeded to throw up on him after his wise crack.)

ME:  “Dad, my elbow hurts and Paul hit me in the shoulder ten times and then I fell down the bottom three stairs and I’m black and blue.”

ME: “How long have you had a weak back?”

My dad had a great way of diffusing a difficult situation, to make us forget about our problems, to make us feel better through laughter.  But he’s not around anymore, and I messed up my back, and it’s been for more than a week back, and there is nothing funny about it.  No matter how many times I tell myself the “weak back” joke, it doesn’t make me feel any better–nothing really does.  Back pain really is miserable, and it is all new to me.

One minute of stupidiy, and so far two weeks of misery.   Despite the running, the biking, the swimming, the eating right, the weight training to strengthen the core, was I really just one little injury away from feeling like an old lady?  Apparently, I was.

I know exactly when I did it–exercising in my basement, ironically, as I was doing an exercise intended to strengthen my back.  I grabbed an eight-pound weight that was by my feet instead of the four-pound weight that was ALL the way across (at least 12 feet) the room, and I proceeded to do a core exercise with twice the weight I was used to.  It felt pretty good in an “I’m so tough” kind of way- until about six hours later, as I plopped on the couch for a little TV time after my father’s unveiling.  Was he trying to tell me something?

I fought it at first.  I pretended I was fine.  I skipped a day of exercise, then the following day I went for a run.  The next day I lifted weights in my basement but skipped the core exercises.  I thought if I just ignored it, it would go away.  But it didn’t, and as it got closer to the time I was leaving for vacation and it got worse, not better, I got serious about resting.  I went to a chiropractor.  I stopped exercising completely.  But it was too little, too late; and I was leaving for vacation.

As Mike was about to pull off the lines of the boat for a few beautiful days of sailing, I was crying in pain, and we ended up in the emergency room in the Anne Arundel Medical Center in Annapolis with a very nice doctor who fixed me up with some needles in the back and some good drugs.  The Novocaine-like drug in the back muscles got me through a good 10 hours, and the drugs got me through a week of vacation on a boat, but even now that I am home and I sit on my soft leather couch, it still hurts like hell.  And I’m almost out of drugs.

The times they are a changing.  I don’t heal like I used to.  I can’t push through the pain.  I can’t ignore an injury.   I’m learning to adjust to the new me–at least for the next few weeks when I hope to heal, but I actually think I am forever changed.  I won’t be ignoring an injury any more.  I’m adjusting.

I’m adjusting to no exercise.  Yes, it makes me crazy, but I find it amazing how many more hours I have to do productive work each day.

I’m adjusting to not being able to move furniture, stand for long periods of time, walk very far, carry anything heavy, get out of the car without a twinge.

I’m adjusting to just shutting up about the pain, because after a while it gets pretty tiresome to others.  Just ask my husband.  He has been alone on a boat with me and my pain for a week.

I’m adjusting to the fact that not even my perfect spouse wants to give me a back rub all the time.

I’m adjusting to the fact that a chiropractor will not help me.

I’m adjusting to the fact that back pain does not curb your appetite.  Peanut M&M’s still taste good.  And you can still pop them in while you are in a prone position.

I’m adjusting to the fact that no one really knows whether you should ice it or heat it.   I’m so confused.

I’m adjusting to the fact just because you have messed up your back, it doesn’t make you immune from other injuries- in fact, it may make you ultra susceptible.  I stubbed by toe, my neck has a crick, I think I am getting a cold, and I just got back from vacation.

And I can almost hear my father saying, “and what do you hear from your liver?”

About A Week Back was last modified: October 16th, 2012 by Ronna Benjamin