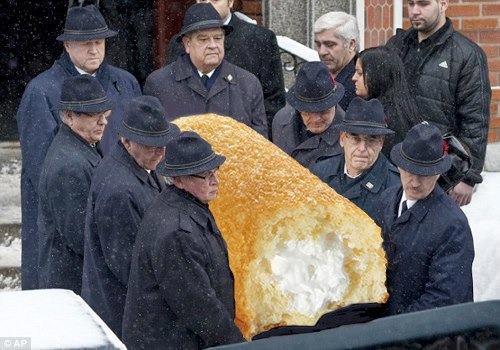 A Winkie to the Twinkie 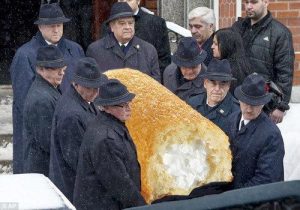 I haven’t had a Twinkie in 40 years, but if the negotiations between the Bakery Workers union and management don’t work out, I am sure going to miss seeing them on the shelves at my local Shaw’s.  After many decades of smooth sailing and a difficult few years and a couple of bankruptcies,  the junk food I grew up with is in dire trouble.   That little red heart above the Hostess “O” and “S” is broken, and the news of Hostess closing up shop, last week broke mine just a little bit too.

It appears to be a generational thing.  For the generation that grew up with turkey and mustard on whole wheat rather than crustless Fluffernutters on Wonder Bread, they just don’t get it.  They don’t remember that Wonder Bread “helps build strong bodies 12 ways”-– and that’s a lot of ways, even by today’s standards.   My organic-vegan-pure food-college-kid has never had a Ho Ho or a Ding Dong.   She doesn’t understand the magic of a naturally and artificially-flavored Hostess fruit pie.

I mentioned to her that I was sad about the possible demise of Hostess.   “You’re sad?” she asked incredulously. “Why would you be sad?”  She was just warming up.  “You do realize, Mom, that Hostess does not make actual food.    Twinkies have many of the same ingredients as batteries do. That processed stuff could survive a nuclear attack.  Mom, Hostess is the symbol of food that is bad for you–if they actually go out of business, it shows……progress.”

Really?  Batteries and Twinkies have many of the same ingredients?   That may be a stretch.   And of course I know that the stuff Hostess makes is a nutritional nightmare–that’s why I don’t actually eat it.   And yet, still I am sad.    Nostalgia has got the better of me.  “Hostess brings back memories,” I told her.  “Memories of when I was a kid.”  I forgot to mention about the 18,500 workers who would be laid off, and I kicked myself for forgetting that fact as I got into bed that night.

Oh dear, what have I created?  I swear I introduced that kid to Ramen noodles and Annie’s pasta when she was little.  It’s amazing how they grow up to be such opinionated people.   I am thinking I will have to sneak my grandchildren out to McDonald’s so they have a little balance in their lives.

But my friends can all relate.  Every one of them is saddened by the news.  Every one of them has a favorite Hostess memory.   One friend said that as a teen, his favorite snack was Sno Balls, the cream-filled chocolate cakes covered with marshmallow and pink coconut flakes.  Yes, there is nothing like a pink coconut flake–straight from the pink coconut tree, I think.  My friend recalled that as a teenage boy, Sno Balls reminded him of breasts.  OK, I thought, not a huge leap–what doesn’t remind a teenage boy of breasts?

My husband told me that every day on his way home from graduate school, he stopped at the nearby 7-Eleven and bought a package of Hostess CupCakes.  He fondly recalled the perfect white squiggles atop the satiny chocolate frosting–and eating two CupCakes in the car on his way home–almost every day for two years.  I quickly calculated: over 1400 CupCakes served.  When I asked him if he was fat then, he replied, “No, I was 22.”

Being a chubby pre-teen, Hostess was always a reliable friend of mine.  I wasn’t picky.  I liked them all.  I used to sneak in the cabinet in our kitchen that was loaded with the “good stuff” when no one was looking, or when I was bored or tired or angry or for no reason at all.  I used to hide the wrappers in the pockets of the shoe bag hanging from my closet door.  I loved to lick the sweet white cream of the Devil Dog to make the cream even with the chocolate cake, and then stuff as much of it as was possible in my mouth for, as we say at my house, a burst of flavor.  To avoid a situation where we might be without, my mom used to keep a box or two in the freezer–and I found that Devil Dogs were even good frozen.

With the news of a possible closing, Hostess stuff was flying off the shelves of supermarkets last week.  People want to preserve those memories, or maybe they just want to sell them at a premium on eBay.   CBS news reported that one person put a price tag of $250,000 on a box of ten Twinkies.  Now that’s a big price for a memory.   I imagine that at many Thanksgiving tables around the U.S. this year there will be plenty of heated conversations about Twinkies, the economy, healthy food choices and the relevance of unions.  I’ve got my fingers crossed for a deal or a buy out, but if the brand lasts, I probably still won’t have another Twinkie for as long as I live.  Doesn’t mean I don’t love them.

But now you have to excuse me.  I’ve got to stop at the market for some black beans and tempeh for Thanksgiving.

A Winkie to the Twinkie was last modified: November 20th, 2012 by Ronna Benjamin