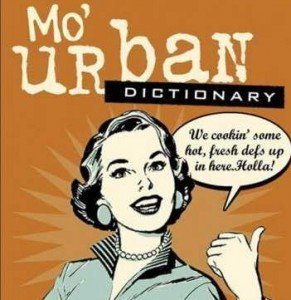 Getting Hip With The Urban Dictionary

Spending a weekend in New Hampshire with two of my beautiful teenage nieces, I felt a special kind of “out of it”–like I had permanently left the world of the young.  I was in a menopausal state of mind. It’s not that they can ski faster, that they look better, or that they are wittier than I. That is all true, but I have long accepted the fact that I am ultra-cautious on the slopes, that my forehead sports a few deep lines, and that I can’t remember–well, I can’t remember sh*t (as my contemporaries might say).  I am thrilled that I can enjoy being out on the slopes in the fresh air (as long as it is not too cold, too rainy, too icy and we agree to quit by 2:00PM), and I don’t even mind that I have to take a pee break every hour.

What I have not accepted is that not only do I not look the “look,” I no longer talk the “talk.”   I am an outsider, a foreigner who does not understand or use the language of the young, hip and beautiful.   When my own kids were teenagers and living at home, I made a point of understanding them and incorporating their language into my own vocabulary.   Without any teenagers at home, everything has turned upside down and inside out.  I would like to know when it all changed.

Should we drive over to Loon for skiing?  They were down with that.  Pizza and salads for dinner?  Down with that too.  As I nursed some sore toes, I looked up both “up for that” and “down with that” on urbandictionary.com, the “go to” site for learning the lingo of the hip. While “Down with that” apparently means “it’s cool, ok, alright,” I was astounded to learn that you are “up” for something when you are so excited about it that you have an erection.  Uh oh.  I refuse to think back to all the times I have told a young person that “I’d be up for that.”

When I came home from the weekend, I decided I needed to get permanently out of my menopausal state of mind.  I spent an hour studying urbandictionary.com in order to expand my vocabulary more fully.  And what an education that was!  There were more than a few definitions I vowed to forget immediately, and others I vowed to weave into my vocabulary immediately because they were so awesome.  I thought I would let my readers in on some of my favorite new hip terms (all definitions-but not uses-taken from www.urbandictionary.com):

Congressional: to act infantile and obstinate, as in “Cut the crap and just call your mother in law.  It doesn’t matter whose turn it is.  Stop acting so congressional!

Googlesmart: someone who Googles a topic, then posts the information as if they came up with it on their own, as in:   “She comes off as really knowledgeable about the green coffee diet, but she’s never actually tried it–she’s just Googlesmart.”

Healthy Gas: the fart produced from a person who eats only healthy foods.   “My vegan friend does not eat any processed foods, yet she still occasionally lets out some pretty mean healthy gas.”

Touron: the combination of a tourist and a moron.  You know, the woman you gave the finger to yesterday because she was driving too slowly down the main street in your town.

Rage eat:  to eat furiously and profusely instead of actually dealing with issues–normally done because the occasion requires a happy attitude, and is most common during family holidays when many treats are available, yet there is much family stress. OMG, I am thinking back to Thanksgiving… were the kids rage eating, or did they really love my pumpkin pie?

I am clearly starting to take charge of that menopausal state of mind.  I will learn the language of the young.  I will be hip again.  I’m totally up for being down with this.

Getting Hip With The Urban Dictionary was last modified: January 22nd, 2013 by Ronna Benjamin