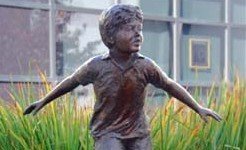 I am a woman who focuses on what I have rather than what I do not have. Yet, there are moments, utterly private “what if” moments, that I have shared only with my husband.

We married late in life. Our blessing of meeting one another was like finding a needle in a haystack. This is my first marriage. I was 42 years old when I walked down the aisle. The next day I turned 43. The miracle of becoming us is what we celebrated. Our gratitude for finding one another made us giddy. Marriage had never been a priority in my life until I met and fell in love with Richard who became not only my husband, but also my best friend.

My marriage and my careers in television, education and writing were my focus along with travel. Our life has been exciting, fulfilling and joyous.  We have pursued our individual dreams and those dreams we have built together.

One night Richard and I began a discussion on what it would have been like to have had a child together.

“I would have wanted a son who looks just like you,” I responded.

I have three sisters and had always wanted a brother. So, wanting a son was a natural response.  I love buying men’s clothing for my husband. I enjoy the styles and combinations. The thought of dressing a little boy in overalls and suits and ties makes me smile. And if he was built like my husband, he would in all probability wear childhood husky sizes which means there would be a delicious amount of boy to hug.

“What would we name him?” Richard asked me, smiling.

We sat for a long time, thinking in silence.

“How about Reid Gregory?” I asked.
“After my father Rubin and your father Gregory. We would call him RG.”

This pleased Richard. He immediately went into a scenario of what it would sound like calling RG in for dinner. The sound of those precious initials was a tribute to both our fathers.

Our discussions continued every now and then referring to RG, the son we might have had. Our talks were not morose. They were discussions about one part of our life we would not have, but we were realistic, always putting it into a context of what we did have and our gratitude for our blessings which were abundant.

Sometimes we would talk about the world the children of today face and we both would acknowledge it was possible that not bringing a child into such chaos might have in some ways been a good thing. On the other hand, would RG have been someone who would have helped lessen this world’s despair? Being a combination of the two of us, I would have hoped so.

Recently, Richard and I purchased a statue for my sister and brother-in-law’s garden. It is a life-size boy in sneakers, sitting holding a bottle filled with lit fireflies.  The “boy” sat in our apartment for a couple of days until the anniversary party when we would give our gift.

As I entered our living room where “the boy” was placed and Richard was reading the paper, I heard myself call out “How are my boys doing?”

That is a question I never had the opportunity to ask in my life. It would have been an experience I would have loved to have had.  Instead, my focus has remained on the students I have taught and hopefully have inspired.  I taught my Communication course as “Life 101” and tried to teach my students self-esteem and how to reach for their potential.  While some people cherish their roses and tulips, I have my prize-winning garden of students, many of whom have stayed in touch.  Each is unique and beautiful. I was their professor, not their parent, but the hundreds of students I’ve had the privilege of teaching will always belong to me, and I to them.

I never had the opportunity to give birth and to teach RG how to live, but I am a woman who has focused on what I can do with what I have. In profound ways, we are all parents to the world in which we live.