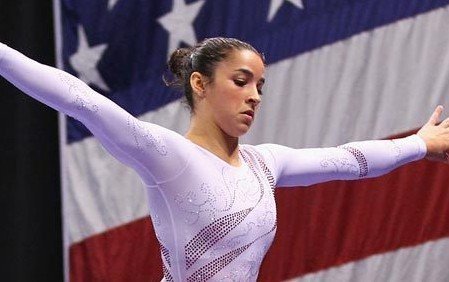 What better way is there to spend a summer evening than plopping on the couch, grabbing your mug of green tea, and watching the women gymnasts compete for the gold.  But as you hold your breath as the athletes flip gracefully (or not) off the beam or across the floor, do you ever wonder what it would be like to be in the stands watching your daughter contend for the gold?  Lynn Raisman from Needham knows what that’s like.  Her daughter Aly is competing for the gold this week in London as a member of the US Women’s Olympic Gymantics team.   I had a chance to talk to Lynn on the phone before she and her family headed overseas for London.

BA50:  How did Aly become involved in gymnastics?

LYNN:  Aly actually started gymnastics when she was two at a “Mommy and Me” class.  She loved it, so she continued with gymnastics classes.  She actually loved a lot of sports.  She also played soccer, but at some point, probably when she was 8 or 9, she had to choose between gymnastics and soccer.  Aly chose gymnastics and hasn’t looked back. She has really driven this whole thing.

LYNN:  No, not really.  I have gone to so many meets that I think I am used to it.  I was going a little crazy the second day of the Olympic Trials.  I thought, “OK, enough.  How much more can we take?”   Everyone was emotional that second day.  We had never been to a venue where everyone was so loud, nervous, supportive and excited.  They told the girls that they had made the team just moments before they walked out –  It was so incredibly powerful, especially for Aly who usually keeps her emotions close to the vest.

BA50:  At what point did you feel she could go far with gymnastics?

LYNN:  Aly was doing gymnastics classes at Excel gym in Needham when she realized that she wanted to train and compete at an elite level.  Excel was having some staffing issues at that point.   The family knew that Alicia Sacromone from Winchester (a member of the Silver Medal winning US Olympic team in 2008) was training at Brestyan Gymnastics in Burlington.  Aly wanted to train at an Elite level, so the change to Brestyan was natural.

BA50:  What is your relationship like with her coach, Mahai Brestyan?  Do you ever conflict as to what is best for Aly?

LYNN:  We have a good relationship with her coaches, Mihai and Silvia. We always leave the coaching to them, they know what it takes to succeed at this level. Over the years we have developed a relationship built on trust, anytime we were worried or concerned about anything we were able to talk to them.

BA50: Was Aly able to have a “normal” high school experience?

LYNN:  Pretty normal.  She was really good about balancing school, her social life and gymnastics.  While this past year she had some early morning practices where we had to juggle some classes around and take one class online, she was able to go to the big things.  She went to graduation and prom, for example, but didn’t go to the post prom party because she had to be at the gym the next morning.

LYNN:  I did gymnastics, but NOTHING on this level.

LYNN:  I was the kind of mom who dropped Aly off at the gym at 4:30PM in Burlington, and my husband would pick her up at 8:30PM.  I was not the kind of mom who waited around for four hours watching practice.  My husband and I shared the driving, and most of the time we were able to have family dinners while Aly was practicing.

LYNN:  Yeah, it was bad.  We were all thrilled when Aly got her license.  Our lives changed then.  We all had more time.

BA50:  Are you working outside the home also?

LYNN: I haven’t worked outside the home in several years. Juggling four kids, especially one who is an elite athlete have made it too hard. Maybe after things quiet down I will think about returning.

BA50:  Toward the Olympic trials, how much time was Aly putting in at the gym?

LYNN:  Not really. Aly is not real emotional.  She is very humble.  She knows what she has to do and just does it.  She is a really good friend, sibling and daughter.  She works really hard.  Maybe that is why she doesn’t have too bad a teenage attitude.

BA50:  Well, you’ll pay for that with the other kids….  Are they proud of their sister?

LYNN:  Of course, but they are all busy with their own lives.  My son plays hockey, one daughter loves horses.  They take all of this pretty much in stride because this has been the way it has always been;  this is what Aly has always done.  My son is an avid sports fan so he is really getting into it the most. Everyone in the family is very proud, but as I said Aly is pretty humble and while making it to the Olympics is a huge deal, when she is home, she is just one of the kids.

BA50:  Having a kid at this level of gymnastics, does it ever negatively affect your family life?

LYNN:   I guess it has been hard to get in family vacations.  We haven’t been away all together for 5-6 years because Aly can’t be away from the gym more than about two days (that’s actually a bonus, usually she only has one day off a week).  Also, when the kids were younger they couldn’t always have friends over after school because I had to be available to drive Aly to the gym.  Now that Aly drives, it is easier.

LYNN:  Aly has decided to go professional, which she is very excited about, but that means she won’t be able to compete in gymnastics in college.  When she first started looking at colleges, she thought she wanted to go to a school where she could compete.  Aly will go to college, but she now has to refocus on what she wants to do in college and select a college based on that.

BA50:  What does a professional gymnast do?

LYNN:   After the Olympics, she will be going on the Kellogs Olympic Tour for three months.   She can also now compete to win prize money, and she can have endorsements.  She has an agent who will help her out with all of this.  Already she is so thrilled that she has been a “Got Milk” ad, and to be representing the Ralph Lauren Brand.

LYNN:  Of course! Chocolate milk is actually the best thing for recovery immediately after a workout.