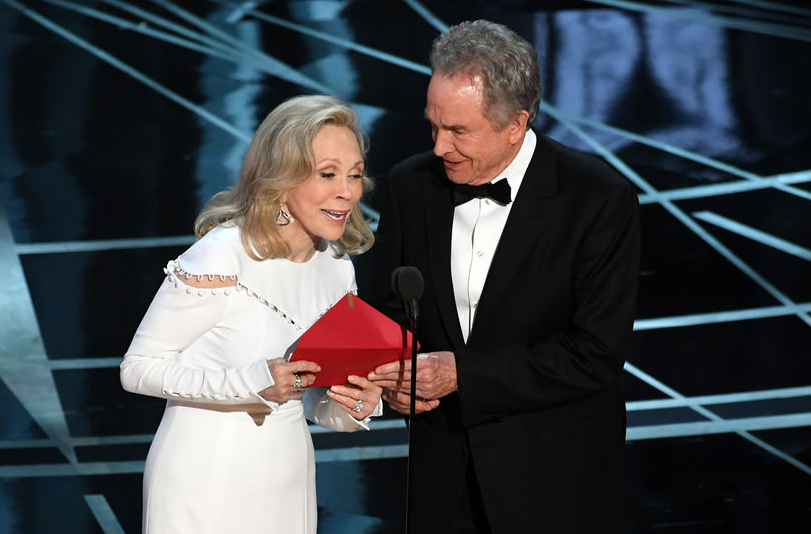 No doubt the story of the 89th annual Academy Awards is perhaps the biggest plot twist in Oscar history. Just as I was resigning myself to the inevitable news that “LA LA LAND” had won Best Picture, it was discovered that “MOONLIGHT” (my favorite film of the year) had actually won! Justice has been done. The right picture won. The Academy acknowledged “La La Land’s” obvious flaws (the stars of this so-called “re-imagined” musical couldn’t sing and dance) to choose the masterpiece that is “Moonlight.” Directed by Barry Jenkins, “Moonlight” stars three actors who depict a young, poor, gay, black man from childhood to adulthood in Miami and glows with the raw poetry of a human being’s unruly truth. The sheer humanity of “Moonlight,” and these profoundly absorbing performances about a reality seldom seen on the screen make it the film of the year.

More humanity was on display Sunday night when the producer of “LA LA LAND” very graciously announced “MOONLIGHT” as the winner and handed the Oscar over. Emma Stone later said she was “beyond excited for ‘Moonlight’ ” and thought it “one of the greatest movies of all time.” That Damien Chazelle won best director is OK with me — that opening scene was astounding, a huge production number on the Hollywood freeway while performers jumped in and out and on top of cars, singing and dancing at rush hour.

Now, who will be fired for handing Warren Beatty and Faye Dunaway the wrong envelope? On the 50th anniversary of their film together “Bonnie and Clyde,” these two found themselves unwittingly at the helm of would would have been the biggest Oscar heist in Academy Award history.

Casey Affleck as Best Actor beating out his closest competition Denzel Washington in “Fences” was the right call. Affleck’s subtle, implosive performance was like an earthquake that resonated from a well-spring of unresolved pain far beyond the confines of “Manchester by the Sea.” The Boston Society of Film Critics named Affleck Best Actor earlier this year — his hometown called it right from the beginning.

Emma Stone was predictable as Best Actress, and did a fine job in the role of an actress who dreams of making it big in Hollywood as we watch her suffer through bruising auditions and the aches and pains of love. She’s marvelous in those comic/dramatic scenes, but not so much in the production numbers. That she neither sang nor danced really well in the movie’s lavish musical numbers seemed not to matter. She remains one of our best actors. I’d have chosen Natalie Portman for her eerie turn in “Jackie” or Isabelle Huppert as a woman who tracks down the man who assaulted her in “Elle.”

I also thought JIMMY KIMMEL did a fine job as host, keeping the show moving and buoyant but on point and politically relevant, tweeting Trump live, masterminding various running gags–one involving jabbing his pal and good sport Matt Damon–and later busing in tourists who thought they were on their way to an exhibition, only to discover that they had been delivered to the OSCARS! They walked into the theater shocked, then immediately found themselves on live TV before a global audience taking selfies with Mery Streep, Ryan Gosling, Denzel Washington (who mimed a mock wedding with one engaged couple!) and a firmament of stars! Absolutely hilarious.

But Kimmel’s finest moment might have been wrapping up this unruly show, when he accentuated the positive–extra speeches and so many good movies–then blamed himself for the surreal mix up! Grace and goodwill under pressure. For more of what my colleagues at The ARTery and I thought read here: