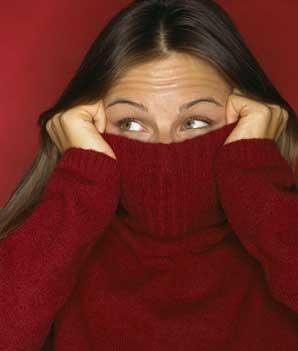 I admit it. I was raised as a Southern Baptist preacher’s kid with a mother who thought French kissing was disgusting.

Sex was not a big topic in our household unless we were practicing the anatomically correct words for all body parts. Believe me, say penis and vagina enough as a kid and you’ll never want to interact with either one of them.

I’m not saying I entered marriage as a virgin or stayed pure by any stretch of the imagination, but I did always feel a little guilty for whatever I experienced. I remember the first time my high school boyfriend borrowed his dad’s car and took me parking. I had never been parking before and things moved pretty fast for a girl who had only been kissed. My boyfriend got my bra unhooked and my blue jeans pulled to my ankles.

Then we saw the flashlight and heard a knock on the window. Yes, the first time I let loose of my libido a cop showed up. I pulled my jeans up so fast that the crotch of my underwear pulled up but the rest stayed at my knees, binding them together. I pulled my shirt down, but the bra was still unhooked.

As we were asked to get out of the car, my bra was causing my sweater to do all sorts of funky things, and I had to hop to the back of the car since my knees were held together by Hanes. When the cop mentioned that the neighbors had complained about us, my only response was, “We weren’t that loud.”

So I learned to be quiet. Sex has always been good, but a very private thing for me. Once a cop catches a glimpse of your privates you tend to become, well, even more private. So I’m the woman that goes into the hot yoga locker room and locks herself behind a stall door to change clothes. I refuse to shower because I don’t want someone to catch a glimpse of me.

I wish I would have worked on this issue when I was young and had the body to express my future new found freedom. Breaking out as a 52-year-old is kind of like Mother Teresa discovering the bikini. You’re happy she has this new freedom, but you’d rather not look at it.

When my daughter told me to read the Fifty Shades of Grey series, I went to Barnes and Noble to purchase them. I hovered around the display for new books, looking to my left, then to my right. Just as I reached for the volume with handcuffs on the front, I saw a man walk up behind me. I quickly put it down with a sound of disgust as if I had picked up the wrong book. How did I end up holding such smut when I was interested in the new Lincoln biography?

I moved to the intellectuals only table and read through some of the classics that bored me in college and still sit on my shelves at home. I stayed there, reviewing something boring, until the man left. Once he moved towards the cash register with his book, I wandered back over to my grey area. I hovered around, reaching and releasing the handcuffs, reaching and releasing. Finally I saw a worker moving towards me, probably reporting a potential shoplifter. I picked up Lady Chatterley’s Lover from the classics table and moved directly to the cash register. If only it were 1928, I would be seen as a sexual libertine.

Later I realized that D.H. Lawrence was no competitor for today’s smut, so I decided to download the books on my iPad. As I tried to download, my password refused to work. Was this a sign from God? Did She know exactly what I was doing?

I read a blog that shared a few lines from the second book and turned fifty shades of red.

Yes, I used to read erotica out loud to others in college, and I looked at pictures of Long Dong Silver with his impressive prick…I mean, penis. But that was when we could all laugh and pretend it was about the comedy. I will read anything out loud if it will make people laugh and sex is the adult-version of potty humor. Say “Long Dong Silver” to anybody, anywhere. A laugh is guaranteed.

I have yet to read the books. I’m pretending it’s because people have told me the writing is horrible. The whole event, however, has caused me to think about my sexuality as I tip over the 50 mark and slide towards 53 this year.

So far, the only thing really subduing my sex life is an 85-pound boxer that sleeps in the bed with my husband and me.

I listen to young women in their 20s who obsess over their bodies and talk about how they don’t like certain parts of themselves. I think that is the big stop sign for women in their 50s.It’s not a total lack of desire as much as it is a reluctance to be naked for any reason. I recently read something where a male writer said that women judge their physical appearance much more than men do.

Men, pretty much, would just be happy with the sex.

I think that my friends who have always been a little hyper-sexual are more concerned about keeping their sex lives super active and youthful. I’m pretty much happy with mine.  I actually feel guilty saying that, but it’s true. I don’t need handcuffs or whips or Nicholas Sparks to have a good sex life.

I don’t believe there are any black and white rules for sex after 50. If you and your significant other are happy, shut out the rest of the opinions on the topic. Be happy. If that means quality over quantity, be happy with it.

Or if you like a little spanking here and there, go for it.

My husband knows that if he tried to spank me I’d knock him unconscious, so we leave spanking out of the equation. But we have burst into laughter in the middle of an intimate moment—that’s our thing.

No matter what your age, when it comes to sex you know what you and your partner respond to. Have fun. Enjoy it. Don’t worry about how much or where or when. Sex is sex, whether you’re 18 or 55. Stop looking for black and white answers to what is or is not an acceptable sex life. There are no absolutes, because with sex there are many shades of grey.

This piece was previously seen on elephantjournal.com