4 Ways To Get Emotional Closure In A Relationship 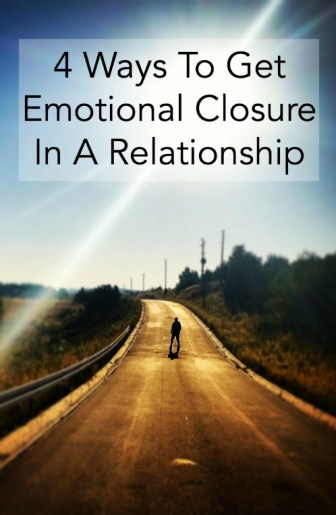 Both times the parting was far from easy. There was a lot of hurt on both sides. I realized that I shared in the responsibility of the failure of both marriages.

I felt tremendous shame at the time.

Later, I hoped for some kind of closure. Both of those men had been important in my life. I wanted to thank them for what they had offered to me. I hoped they could hear my sincerity. I hoped that both of us could sit down, and discuss as reasonably and respectfully as possible, what had occurred. What we got right, and what was terribly wrong. We might not agree, our perspectives might be quite different, but at least we could listen with a caring ear. I didn’t expect it to happen immediately, but hoped that with time, we could attempt it.

It never happened, with either ex.

That was, and still is, somewhat disappointing to me.

But who knows… perhaps the marriages wouldn’t have ended if that kind of conversation was possible in the first place.

Both remarried, and are doing well.

Why do I share this particular part of my life with you?

Many people long for emotional closure in relationships — not just marriages that ended in divorce, but friendships that suffered from misunderstanding or betrayal of confidences, or estrangement from a sibling or a parent. Even if there isn’t hope for reconciliation, people can carry tremendous pain that what was once a vital relationship in their lives, will never end —  respectfully.

“I wish we could both talk about how our relationship suffered. I’m quite willing to take my share of the responsibility, but they refuse to talk. I haven’t seem my parents in years.”

“I’ll never know what her true feelings are. I hear that she blames me for everything, but I’m willing to hear what she has to say. I want her to know that I really cared for her.”

“He just disappeared out of my life. I still don’t have a clue what went wrong.”

What do you do if someone you cared about, or tried to have a good relationship with, simply disappears? Cuts you out of their life, and remains angry and bitter toward you? Maybe even blames you for something you don’t understand or agree with?

It happens all the time.

What can you do? Here are four things you can work on by yourself.

1) Realize not everyone has the willingness to take responsibility for themselves.

Often the conversation you can imagine having is just that. Imagination. The other person doesn’t have the capacity to have an objective conversation with you. They don’t know how, or they want to blame you only. Maybe they’re a narcissist and can’t fathom their own culpability. But there’s no way “in God’s green earth” (as my father used to say), that they’re going to sit down with you, and rationally and reasonably talk about your differences.

You’re only in control of half of that discussion. You can’t force it to happen. It won’t work. 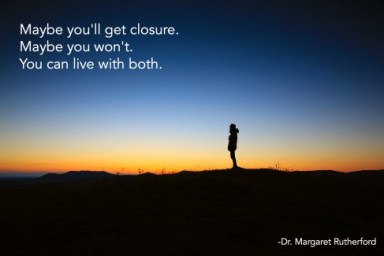 2) Quit trying so hard. Give it time.

If someone is blaming and even vicious toward you, your attempts at fixing it, or trying to change their mind, is probably only fueling the flame. And keeping you anxious. But slowly, with time, things are likely to cool off.

Maybe you’ll get closure. Maybe you won’t. You can live with both.

3) Maintain your own integrity.

If the other person is your ex, it’s very hard, because you fear how your children are being affected by hearing mean things about you. If it’s an old friendship that has deteriorated, it can feel awkward to maintain other shared friendships. If family, you may have to explain that you don’t have a relationship anymore with a family member. That can feel awkward or embarrassing.

Trust that who you are will shine through. Be mindful of your own integrity.

Don’t be controlled by what the other is doing or saying.

Guide your own life in a way that reflects your values. Your children will learn. Your friends will take sides or they won’t. If your biological family is not available, you can create your own.

4) Make sure you’re moving through your own feelings.

It’s hard enough when relationships end that you’ve valued or worked hard on. Add a lack of closure to that picture, and it can cause a more complicated grief.

As in all grief, try to notice whether or not you’re moving through all the emotions of loss: denial, anger, fear, sadness. It’s when you get stuck in one stage of grief that your feelings can become completely overwhelming and entrenched.

You can get closure, even by yourself. In fact, it’s very important to do so, so whatever shame you may feel can be let go.

It’s a gift you both give, and receive.

4 Ways To Get Emotional Closure In A Relationship was last modified: August 3rd, 2016 by Dr. Margaret Rutherford