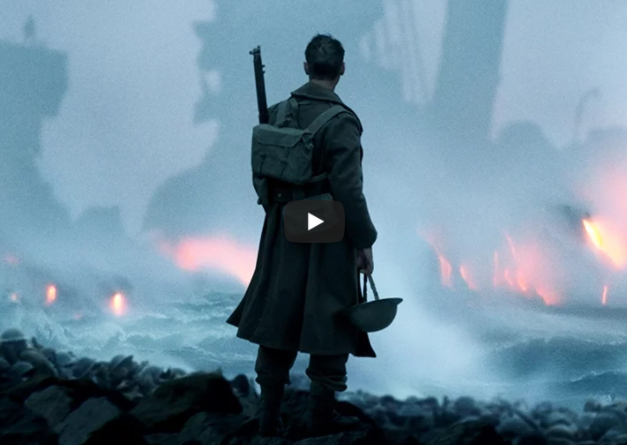 A few more SCREEN GRABS in the dog days of summer–and none of the following are dogs:

DUNKIRK: If you haven’t already, see this masterful and intimate experience of the grueling WWII battle when the Nazis had 400,000 Allied troops– British, French, and Belgian–trapped on the beach at Dunkirk but they never surrendered; many made it home, and through relentless resolve and ingenuity in the air, on the ground and below the sea, set the logistical and psychological stage for the Nazi defeat. Writer/director Christopher Nolan (“Inception,” “Interstellar,” “The Dark Knight”) keeps the film poetically in motion, with minimal dialogue and mesmerizing images of sea melting into sky:pilots maneuvering to kill, the dead flowing back with the tide, the flotilla of civilian boats racing to scoop up survivors– all speak volumes in luminously shot and choreographed visuals. At times the story lines are confusing, and I missed a larger historical and political context; the film presumes we know all of what was at stake. But Nolan had deeper concerns: the camera closes in on the pitiless cost of war through individual stories that reveal the complexities of what it is to be human under these circumstances: the erosion of sanity, betrayal and breakdown in the ranks, impossible moral choices under pressure, and the random physical and psychic toll it took on the too young men and women who had the fate of the western world on their shoulders; the very last image is a silent killer.

BABY DRIVER–This is one of the most entertaining films of the summer, a high stakes, high speed, action thriller about a sensitive hotshot named “Baby” played by the baby-faced Ansel Elgort who drives getaway cars for a big slick bad guy (Kevin Spacey) to whom he’s indebted and who assembles teams of low lifes (Jon Hamm, still desperately shedding his Don Draper, Jamie Foxx, Jon Bernthal) to pull off his meticulously planned heists. Baby meets a waitress played by the sweetly sassy Lily James, and they suddenly fall in love, 50’s style over a stack of pancakes and a jukebox full of tunes– on the soundtrack and running through baby’s earpods. All he needs to get into gear and manage his tinnitus– “is one killer track.”  Writer/director Edgar Wright turns every car chase into a smokin’ vehicular theatrical, cutting on the beat, wheels turning, bullets flying, and fueling it with just enough crime, punishment, and redemption to leave you charged up and rarin’ to go.

THE BIG SICK–Everyone I’ve talked to who has seen it, loved it–including me. Call me crazy, but I had no idea where this flick was headed (despite the telltale title) and it ended up being one of the funniest, smartest meet-cute-across-a-cultural divide rom coms I’ve seen. Blame it on a wise script and a quirky cast lead by Pakistani-born comedian Kumail Nanjiani who co-wrote the screenplay with his real-life wife Emily V. Gordon. Kumail plays a struggling stand up Pakistani comic named Kumail who falls for blonde, blue-eyed Emily an offbeat charmer played by Zoe Kazan. This is a problem for Kumail’s family who’s none too subtly plotting to arrange his marriage which involves several awkward dinners and a parade of unsuspecting prospects who show up “unexpectedly”  trying to make an impression. They do. This is all funny but predictable in rom com world, when suddenly the action takes a sad, wild left turn and I had no idea where we were headed. Enter Emily’s immediate family, her mother played by the irrepressible Holly Hunter and her dorky, unwittingly cool dad played by Ray Romano. I hung on every familial twist and turn along an uncharted road. I would see this again for all the one liners, hilarious secondary characters, the genuine insight about love and partnership, and a sweetheart of an ending.