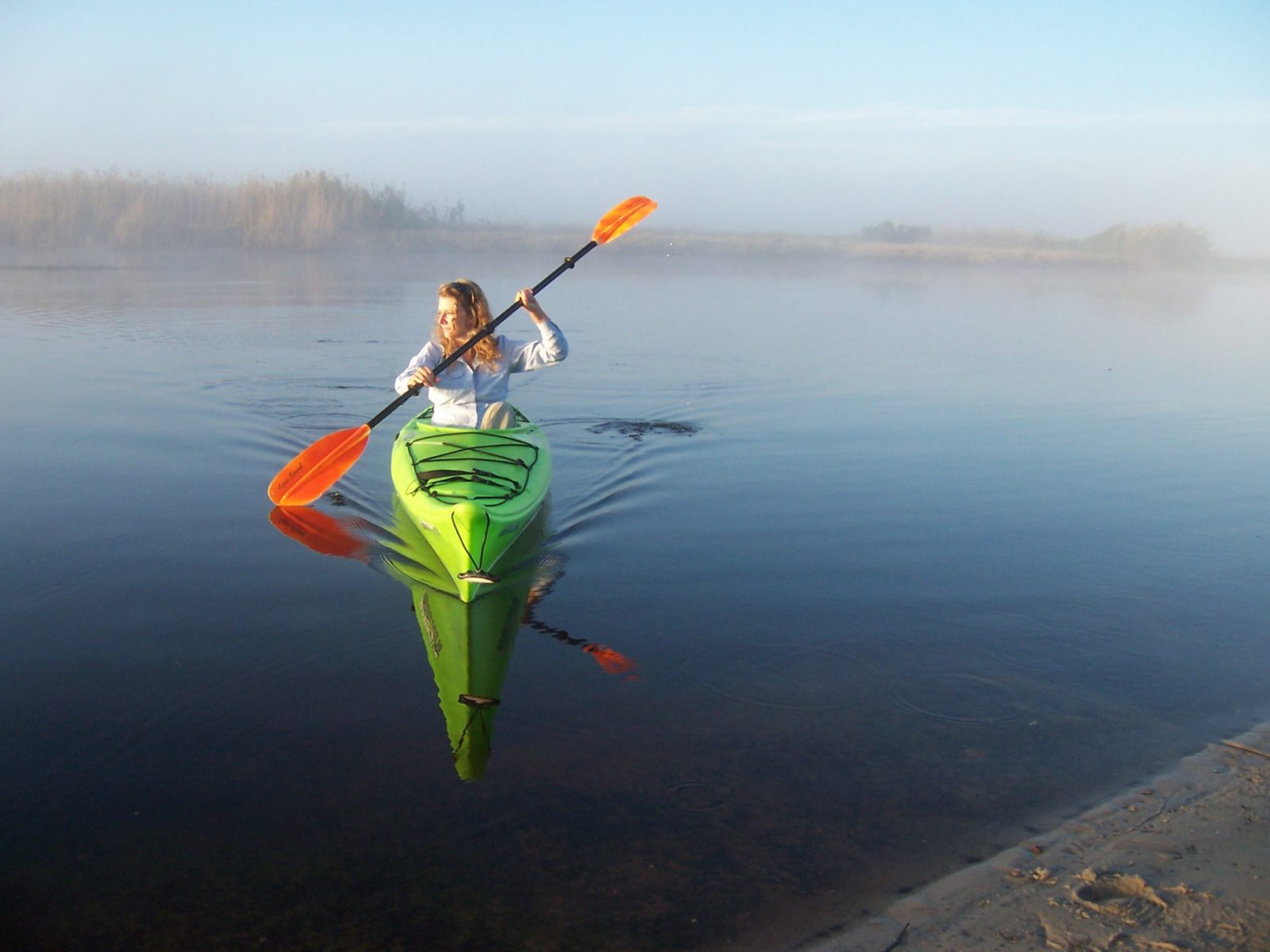 15 Miles on the Erie Canal

Actually, it was more than fifteen miles on the Erie Canal. Much more when you factor in headwinds.  But now you have that song stuck in your head, don’t you?

I didn’t have a mule whose name was Sal, but I had my husband whose name is Barry, and we needed an adventure for our 10th anniversary, so we planned a trip paddling inn to inn and town to town along the Erie, East of Rochester. You might know that the Erie has recently been designated a National Heritage Pathway; an (ambitious) paddler could travel hundreds of miles from north of Saratoga Springs to Tonawanda, near Niagara. I think of myself as ambitious, but also pretty lazy. I like adventure by day, but I don’t want to camp after paddling 15 miles. But neither do I want to pay thousands of dollars for guided inn-to-inn adventures offered by established companies such as Backroads or Butterfield and Robinson.  So my husband and devised our own route from Fairport, NY up to Palmyra (about 13 miles) and back, staying in inns and B&B’s. There are several areas of the Erie along which a couple or family of casual kayakers could make such a trip.

I think ours was the perfect itinerary. We rented kayaks from the Erie Canal Boat Company in Fairport, paddled for a few hours – the steeples and clock towers of Fairport giving way to canalside camps and leafy glades where great blue herons waded. We stopped just before Lock #30 in Macedon and pulled our boats up at a canoe landing. A couple sat fishing and offered to watch the kayaks while we walked up the road, at the lockmaster’s suggestion,  to look for lunch at “Big Scott’s Texas Hots.”  Scott was in fact big, and friendly. After one of the better roasted chicken sandwiches I’ve ever had, and a quick lesson on hotdogs from Scott, we got back to our boats, got some tips on canal fishing from Helen and Bobby, and made our way to the lock.

I’d learned about Erie Canal locks in grade school, but never really appreciated how they worked. Maybe you can’t until you’re sitting in a 10 foot kayak that wobbles when you sneeze, at the bottom of a 20 foot tall, 300 foot-long tank, clinging to a muddy rope, while 12 million gallons of water rushes out from beneath you, so you can eventually paddle out at the lower elevation.

We survived that and lock 29, and paddled on up to Palmyra, birthplace of Mormonism, graced with the country’s most extensive collection of coverlets, and home to the Canaltown B&B. It says something about Palmyra that this is one of the few places to stay in town. Barbara and Bob Leisten bought the ca 1850 house in 1973, redecorated it in colors popular at the time while maintaining the house’s historical legacy (think orange shag rugs sporting mannequins in Victorian dresses standing around as if at some sort of timeless cocktail party). What Barbara and Bob might lack in desire to redecorate for the latest century, they more than make up for in kindness and advice on where to get the coldest beer (Lock 29, proving that you can, in fact get a little drink before getting to Buffalo),  great breakfast cooking skills and tales about the Canal. Bob worked in the locks and has become an expert on the mechanics and history of the country’s “first superhighway.” They also surprised us by allowing, toward the end of breakfast, that they were expert “wine educators”, and proceeded to advise us on where locally to enjoy the best Finger Lakes wines.

We paddled back to Fairport the next day, which is a bit upstream– the canal does have a current, made considerably more rugged on this day by a good 15 mile an hour headwind. If you don’t want to paddle back the same route you came, you can arrange for the kayak rental company to shuttle you back to Point A. Erie Canal Boat Company also own the Mid-Lakes Navigation Company, which runs house-boat-looking vessels along the canal and waterways, from Skaneateles to Lockport. It’s a great way for cyclers not wanting to backtrack to return to their starting point.

In the end, though I was cursing that wind (think four hours on a rowing machine set to the toughest resistance, and the blisters coming up on my hand), those clock towers of Fairport were indeed a sweet sight. And as the wind settled, my husband retrieved a white “Just Married” balloon bobbing in the canal. We were proud enough of ourselves (and cheered by what we took as an omen for the next ten years of our married life) that we figured we deserved several pints of local beer at Mulconry’s, Fairport’s noisiest Irish pub.

I got to see more of the Erie a few days later by biking from Spencerport to Medina. Again in a headwind, which I calculated (with the help of an engineer friend from Kodak) to add about 30% more trip to our mileage. Beyond the sweat and dust, though, we were struck by how unstaged these towns-Adams Basin (where we stayed in the unbeatable Adams Basin Inn) Brockport, Albion, Medina- along the canal are. Though the Erie Canalway people are actively promoting the trails along the canal, the towns don’t seem to know they’re supposed to be tourist attractions. It was the Fourth of July and most of them were completely empty. Once off the trail, in search of lunch and beer, we could have rolled down (or maybe lay down in)  the main streets, completely untroubled by traffic. Though we did run into a friendly cop in Albion who directed us to the only open restaurant in town that day.

These Erie adventures- on bike, or on foot (the towpath that runs for hundreds of miles along the Canal is ideal for walkers), or by kayak- work so well because of the great base camp-style inns and B&Bs,  and shuttling services of bike and boat rentals and inn owners. They each make it easy to plan a one-way trip, or to leave luggage behind and carry only a small rucksack.  The night before we embarked on our kayak adventure, and the the night after we returned, we based ourselves at the Brookwood Inn in the Canal town of Pittsford, just upstream from Fairport. Not only does the Brookwood have super comfy beds, and a hearty (free!) breakfast, but they held on to our big duffel bag, and picked us up from the Irish pub when we were ready to return. They’ll shuttle guests to bike and boat rental locations. The one thing you must do when visiting the Brookwood is to eat in their steakhouse- our meal was one of the highlights of several weeks of traveling.

The Adams Basin Inn is another ideal “base camp”, sitting right on the canal (our room had a sweet porch where we sat and toasted after our long, windy bike ride), overlooking the Adams Basin “Lift Bridge” (operators will give you a tour if you ask; cyclists take note: the Canal Liftbridges will also give you water if you’re thirsty). Owners Pat and Dave Haines have restored an almost-two-hundred year old tavern, make a scrumtpious breakfast, and will drive you wherever you need- local restaurants, bike rentals, maybe even the Rochester Amtrak station- meaning you can really plan a car-free Erie vacation. The friendly people at VisitRochester can help you plan your trip.

I can’t help but feeling that in a few years, when the bike trail is complete and travel is possible from one end to the other, the folks in charge will be marketing the trails as a major destination, and those little towns will be selling t-shirts, ice cream and old time photos. For now, it feels like a secret.

Find out more about other inn to inn, car-free good times at WeekendWalk.com.

15 Miles on the Erie Canal was last modified: July 6th, 2012 by Jamie Stringfellow